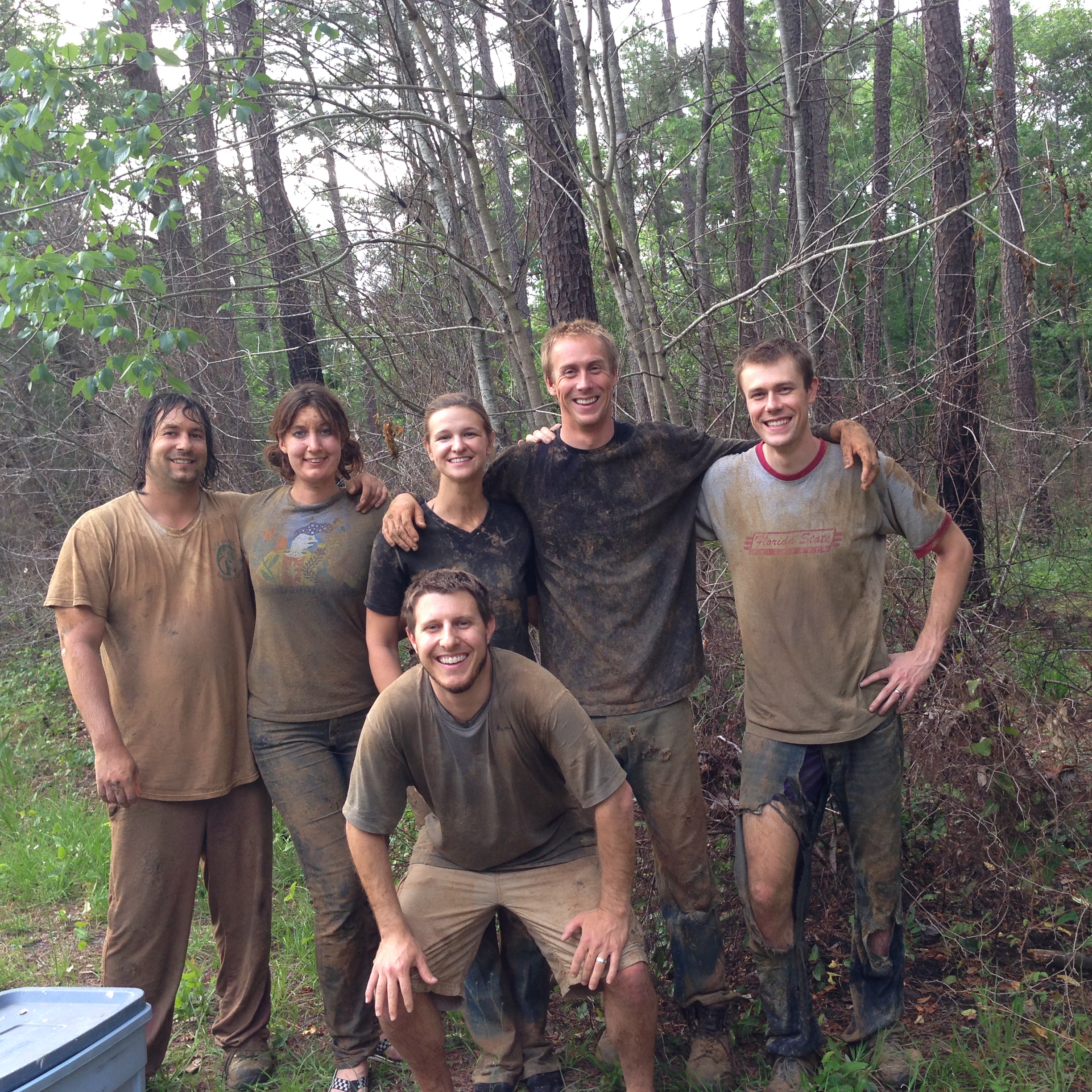 Sorry to start out this way, but caving is dangerous.

Below is a list of what you can expect on a caving trip, ethics and gear you’ll need.
Caving is a very physical activity. Caves are absolutely, totally pitch-black dark. Moving through the average cave can involve walking, stoop walking, hands-and-knees or belly crawling over rock, mud or sand, wading or swimming, climbing steep slopes, walls and chimney-like shafts. Some passages are barely larger than your head and can require hundreds of feet of crawling. Others are large enough to place a good sized building inside.
There is a good chance you will come out of the cave slimed in mud from head to toe. It is not guaranteed, but it is likely. Imagine rolling in mud for a few hours. There you go.

Caves in north Florida and south Georgia are relatively warm, about 68-72 degrees Fahrenheit.

Caving is an inherently dangerous activity. Cavers may be exposed to loose or falling rock, steep climbs, deep pits, slick surfaces, water and the occasional wild animal. You’re inside something, but it’s still the great outdoors.

The trick is to have the right gear, training and respect for the cave environment. A typical caving trip is an all-day affair. This includes meeting the rest of the team, driving to the cave, getting gear ready, moving through the cave, getting out and cleaning up and driving home.

There is no other activity like it.
Our caves have formed slowly, drip by drip, over thousands of years as water slowly dissolved miniscule amounts of rock and redeposited crystalline formations. There are opportunities to see worlds few other people have ever seen. There are still new caves and new sections of caves to be discovered. There are vaulted chambers the size of a football field, rooms with clear crystals shaped like angels dancing on the ceiling, underground streams and winding slot canyons where no sunlight has ever fallen.

Caving should be fun. But as with all things, fun doesn’t mean mindless. There are a few areas of ethical concern in caving.

Caves are made of rock. However, they are far more fragile than you might think. In fact, they may be some of the most fragile environments on Earth. Crystal formations take hundreds to thousands of years to grow. A simple soda straw formation might be older than a massive redwood tree, yet break at the slightest touch. Even if the formation doesn’t break, just the tiny amount of oil transferred from your skin to the formation can disrupt the flow of water needed to keep the formation growing.

With this in mind, the ethic of caving is to leave the cave as you found it. It only takes one person’s careless or malicious act to ruin thousands of years of nature’s work.

There is life in a cave. Bats, cave crickets, salamanders and cave crayfish are some of the critters that call caves home. Please take special care not to disturb them.

It’s your cave trip, but it’s their home.

The value of caves has been acknowledged by more than just cavers. Florida, Georgia and the Federal Government all have laws protecting cave resources. Vandalizing or removing formations (called speleothems) is illegal. In many cases, so is harassing cave life or damaging archeological sites.

The grotto may be able to provide some of the gear listed below to novice cavers.

Main light: a headlamp is the preferred lighting equipment. You will need to have your hands free, and a handheld flashlight will make you miserable or worse.
Helmet: to protect you from a rock falling on you, you falling on a rock or you standing up four feet in a three-foot-high passage.

Clothing: Long pants and short sleeve shirt will work. Synthetics are best farther north where the caves are colder, but cotton will do here. Wear something that can get ruined without breaking your heart (see the mud section earlier). Also, a change of clothes for when you get out of the cave. A small synthetic shirt is good to carry in your pack if your group stops for a while and you start to get chilled.

Gloves.
Knee pads (strongly recommended).
Boots: sturdy with ankle support.
Secondary light source: At least two secondary sources of light and extra batteries (Three light sources is considered the minimum). The AA Maglite or similar flashlight is a standard for caving. Big D size flashlights are heavy and bulky and will make you very unhappy. Avoid the flimsy kitchen flashlights. If it’s pink or decorated with flowers you probably don’t want to use it. Go for aircraft aluminum.

Water: in a screw cap plastic bottle. No pop-on lids and no glass. Keep in mind, you might be rolling over your bottle.
Food: nothing that smooshes. Granola bar in a small plastic container is a good start.

Something to carry your stuff in: Zippers die quickly in the muddy cave environment, but for a trip or two, a small zippered fanny pack will do.